Jesus looked at them and said, “With man this is impossible, but with God all things are possible.”

Remember back on January 1? Did you have a resolution? If so, it was probably something  that would improve your life in some way. Lose weight? Stop drinking? Stop spending so much money? Or maybe it was more about your character–be nicer; stop yelling; work harder? So how’s that going for you? Now it’s the middle of February so are you still focusing on it and working toward your goal? Or was it just too hard–practically impossible?

Or so you told yourself.

Now my goal isn’t to shame you or make you feel bad in any way. If your resolution was just a New Year’s thing and you weren’t all that serious about it–fine with me. But if it’s something that you believe you truly need to change and you believe God wants you to change it, then I’d like to give you some encouragement to keep you going. Was your resolution something that would improve your life in some way?

Then God wants that for you as well. John 10: 10 says, The thief comes on to steal and kill and destroy; I have come that they may have life, and have it to the full. Being a Christian isn’t just about going to heaven, God wants you to have a good life here. And what may seem impossible to us isn’t really impossible at all–not with God.

I recently made my goal weight at Weight Watchers by losing 59 pounds! Talk about impossible–believe me it seemed that way many times. It was those times when I would turn to God in faith and in prayer. And He was always faithful.

One of the questions people ask when they hear that is “how long did it take you?” And the answer isn’t impressive at all. It took me six long years but… after they hear the rest of the story, they have to know that it was only with God, that I was able to do it.

I joined to lose about 20 pounds–the same 20 pounds I’d gained and lost many times. Within six months of joining, I was diagnosed with bilateral brain tumors. That’s when my health became a priority for me.  So along with battling my weight these past six years, I’ve been battling brain tumors. That battle included 2 Gamma Knife treatments, 3 rounds of chemo (Avastin), and countless months of being on steroids. All of which caused some serious side effects, some temporary and some permanent, not to mentions they not only slowed weight loss at times but actually made me gain weight.

The results of my battle with the brain tumors include complete deafness in one ear; partial in the other; serious balance issues along with a multitude of other medical issues. I could have chosen to quit the weight loss journey any time and people would have understood. But I understood that even though I will never be as healthy as I once was, I wanted to be as healthy as I could be.

God wanted that for me as well!

And I know I couldn’t have done it without HIM.

If you’re facing an impossible situation, remember with God, all things are possible! 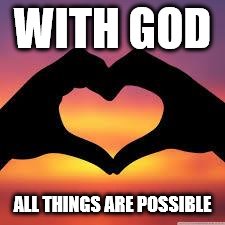