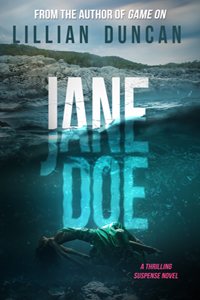 JANE DOE is my latest release. I have a little more in common with JANE DOE than I usually have with my characters and I can admit that makes me a little uncomfortable. True the details are completely different but there are some commonalities as well.

Jane Doe also known as Raven Marks survives a brutal kidnapping but just barely. Along with a broken body, her mind is broken.  That’s sound like hitting rock-bottom, doesn’t it? Even though, I’ve never survived a brutal kidnapping, I have hit rock-bottom–physically.  I was diagnosed with bilateral brain tumors in 2012. They were non-cancerous but they still wreaked havoc on my health.  By the end of five years of treatment, I had to use a walker; barely had the energy to walk to the kitchen; was completely deaf in one ear and partly deaf in the other; severe balance issues as well as a multitude of other “little” symptoms.

The choice is yours, just as it was up to me to decide.

I knew I would never be as healthy as I was before the tumors, but I decided I wanted to be as healthy as I could be. That meant believing God’s promises–even when it seemed impossible–even when I wanted to give up–even when I didn’t see any improvement.  Hebrews 11: 1 says, “Now faith is confidence in what we hope for and assurance about what we do not see.” In other words, believing when it seems impossible–believing without seeing.

In JANE DOE, Raven literally hits rock-bottom when she’s thrown off a cliff. As Raven struggles to rebuild her life, she learns that God is still trustworthy; that God is still faithful and loving; and  that God is still all-powerful. Her belief in God gives her hope for the future and assurance about what we do not see.

I learned those same things during my journey to a healthy-er me. And that’s what I hope my readers learn when they read JANE DOE!

I usually have a giveaway to celebrate a new release and this time is no exception. The first giveaway will be here on my blog, but there will be a second giveaway later, but you’ll have to wait until next week for that information  For now, leave a comment on any of my Jane Doe blogs, and you’ll be entered to win one of three  $10 AMAZON GIFT CARDS! That’s right–three winners! But wait…there’s more!  If you tweet, or post about JANE DOE  on your social media, I’ll give you a second entrance.  Just enter the link as a comment and you’ll be entered a second time. EASY PEASY!

A Broken Body. A Broken Mind. What if she isn’t his last victim? JANE DOE by LillianDuncan https://buff.ly/2Zf6NdV

A chance to win Amazon Gift Cards at Tiaras & Tennis Shoes to celebrate  the release of JANE DOE. No purchase necessary to be entered. For more details, go to www.lillian-duncan.com